Beginning with her first tournament in Oshkosh, in 1977, Bethany has competed in Overall, DDC, Guts, Ultimate, and Freestyle tournaments around the US and in Europe. She got into the Guinness Book of World Records by setting the world record for Women's Distance (124,73 meters / 409'), during the finals at the WFDF World Overall Championships in 1987.  While that record has been broken, she currently holds the World Distance record for Women Grandmasters (91 meters). She loves to freestyle and won the FPA World Championships in the Women's Division in 2002. 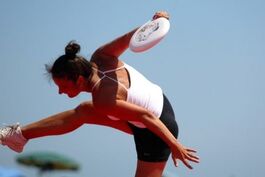 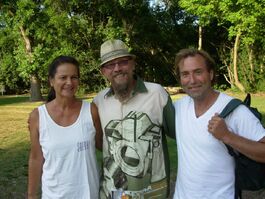 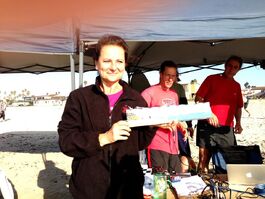 From Bethany's Player Profile at freestyledisc.org

How I started playing: While in college, my friends and I would play frisbee after our classes. When winter came, we formed a college club so that we could use one of the school's gyms, and play inside.

As a disc athlete, my U.S. and World titles have come in freestyle, Double Disc Court (DDC), and distance. My partner, Judy Robbins, and I were the Women's Pairs Champions at the FPA World Championships in Boston in 2002. My favorite routines have been my Mixed Pairs routine with Rodney, my husband (we took 2nd place in Mixed Pairs at the FPA World Championships in Italy in 2003), and my Women's Pairs routine with Diane Marguilles at the U.S. Open in 1987 or 1988.

I have also set three World Records in distance, including the one that got me into the Guinness Book of World Records: the Women's distance record, set in 1987 (124.73 meters - 409 feet).

Here's the full story on how I started playing: I lived in the dorms on campus during my first two years at the University of Wisconsin-Milwaukee. My friends and I would play frisbee after our classes. When winter came, we formed a college club so that we could use one of the school's gyms, and play inside. We would divide up our gym time, starting out with freestyle, then play some Ultimate, and then Guts.

Our first national level tournament was an indoor "North American Series" (NAS) tournament in Ann Arbor, Michigan on my birthday in April of 1977. Freestyle, distance (actually, it was "wall hitting") and guts were the events. Jo Cahow was there, and she told us that she liked our club t-shirts. We were so proud! Later that summer, we went to NAS tournaments in Chicago and Minneapolis. We practiced all the events, and entered them all too.

After moving to San Diego in 1987, I found that most of my friends were freestylers, so I would go to the Cove, or to the beach, and play with them. Soon, most of my disc play focused on freestyle and DDC. My favorite jam spot memories are of the La Jolla Cove and the beach in Del Mar, both located in the San Diego area. Close behind on that list are the La Jolla Shores beach and the beach and/or grass near the 'coaster in Mission Beach. San Diego was also "the place to be" for DDC play. We played each Thursday night, Saturday morning, and many Sundays.

During the 1990s, I served on the board of directors of the Freestyle Players Association (FPA) - first as the Treasurer and then as the Director/President. During that period, my San Diego friends and I coordinated several FPA organizational retreats and I oversaw the process of incorporating and obtaining the FPA's tax-exempt, charitable status from the IRS. I coordinated most of the judging logistics at six FPA World Championships and co-directed the Summerfest Open Flying Disc Championships in Milwaukee in 2000, 2001 and 2002. I have now been back on the FPA board for about a decade, working to make our sport one that everyone can enjoy!

Even though I still consider myself an "overall" competitor and love MTA, Distance, and especially Double Disc Court (DDC) I find myself concentrating mostly on freestyle - and I certainly spend most of my frisbee time Jamming!

Partners past & present: I have never really had a steady partner for tournament play. Here are some that come to mind: Terry Bogenhagen, Paula and Marie Elsner, Anne Graves, Diane Marguilles, Tita Ugalde, g. rose, Mandy Carreiro, Lori Daniels, Mary Lowry, Judy Robbins, Amy Bekken, Stacy McCarthy, Peter Laubert, Joel Rogers, Dave Schiller, Toddy Brodeur, Paul Kenny, and (of course) Rodney Sanchez. The Frisbee Family has nurtured me for over two decades, and I am committed to return the favor whenever possible. In addition to loving the sport itself, it has really been the disc-related friendships I have developed throughout the years that have sustained my interest in frisbee.

Freestyle Career highlights: Judy Robbins and I won the Women's Pairs event at the FPA World Championships in Boston in 2002. My all time favorite routine was my Mixed Pairs routine with Rodney, my husband, at the FPA Worlds in Italy in 2003, where we took 2nd place

Media exposure: Most recently: HGTV's Games We Grew Up With

Freestyle Mentor(s): Jose Montalvo, Chau Rottman, and Steve Hubbard were my earliest inspirations. When I went to my first WFC, Donny Rhodes was the man to watch. Peter Laubert, Joel Rogers, and Dave Murphy have patiently provided me with pointers on how to improve.