Start a Wiki
Frisbee catch games were simply part of the roster of games and toys Dave DeRemer and I played from the mid-sixties on. We buddied up with Dave Jewell as "The Alfred Boys" in 1978 to direct our first Flying Disc Tournament, “The Bethesda Open ”, in Waukesha. Accuracy, Disc Golf and Distance were the featured events. The top deck of a slide served as the first tee of the golf course. Five holes were metal light posts that rang nicely when hit. You could hit any metal. The poles were at least 20 feet high. One hole was a board on a backstop, one hole was a circular sand box, another hole was a horse swing and the last hole was a door on an octagon spring house. There was a a mandatory shelter to throw THROUGH to make it to the spring house door. This event lasted five years attracting around 50 players each year.  Freestyle eventually replaced distance. I have directed at least one tournament each year since.

My experiences on the Ultimate side included directing many 30-40 team tournaments including The Big Ten Open, Ultimate Players Association Regionals, 1991 College National Championship, and many smaller events such as Savage 7 and Home Brew. I served as Northwest Plains Ultimate Players Association Sectional Coordinator for 12 years which included maintaining a team contact list from WI, MN, ND, SD and directing the sectional tournament every fall. There were 7 teams my first year and 42 when I passed the job on. I helped start a team at UW La Crosse in 1979, started the UW Oshkosh team in 1980 and played with Madison until 2006. I competed in over 2500 tournament games. I coached the UW Madison ultimate team to its first 3 National Championship appearances in 90, 91 & 92.

I have served as President of Madison Area Disc Club (now called Mad City Disc Golf) for 7 years (1997-2004), Secretary for 1 year, Treasurer for 4 years and at large for a few more. I have served on the Wisconsin Disc Sports Association Board since 1998, currently as treasurer and Wisconsin Disc Golf Tour Coordinator. I designed Hiestand Disc Golf Course and have taken care of Elver for many years. I have operated "Sportacular Flying Disc " shows since 1994 mostly with Mike Hughes and Wham-o his boarder collie. We have hired out to libraries and park departments all over central and southern Wisconsin. We were headline entertainment for the Badger State Games one year and Craig Ewing and I headlined the Milwaukee Summer Fest Sports Stage for 3 years. I have played in more than 450 tournaments of various Flying Disc games. I have won in Open, Master, Grand Master and Coed divisions and I have also finished last in each of them. I have competed in 2 Ultimate, 3 Disc Golf, and 9 Overall World Championships.  I hold the Grand Master Flying Disc Overall World Championship title held in San Diego in 2005 and finished runner up in 2006.

I love my Karen, Vanessa, Janelle, Don, Ava, Maliya, Woody and Ashley. Percy is a hoot too.

He is a founding member of Madison Ultimate Frisbee Association in 1992 and unofficially named it M-U-U-U-U-F-F-A after the dairy state.  In 2012, he stepped down as president of MUFA after an 18 year tenure and still serves on the board. He was on the organizing committee and served as the site director for the 1993 World Flying Disc Federation World Ultimate Club Championships held on campus in Madison (the largest flying disc event in Wisconsin history with 1500 players from 17 countries and 130 staff). He was course director at O'hauser for the 1998 Amateur World Championships held in Appleton.  Brad and his wife Karen co-directed A Disc's Throw 2003 World Master/Junior Overall Flying Disc Championship in Madison. He organized the distance competition for both the 2007 PDGA Am Worlds in Milwaukee and the PDGA Pro Worlds in Ashland. He has directed numerous Wisconsin State Overall Championships, 8 Mad City Open tournaments, and many other events. He has returned in 2014 as the Director of the Mad City Open. He is also currently director of the Wisconsin State Overall Flying Disc Championships and the Justin Trails Open. He is a member of the Wisconsin Disc Golf Hall of Fame . He is a founding board member of the Wisconsin Disc Sports Association with Barry Schultz, Don Hoffman, Terre Carlson, Randy Schukar, Tom Jenkins, John Terlap and Eric Paulson . It is obvious that he is also a good juggler. 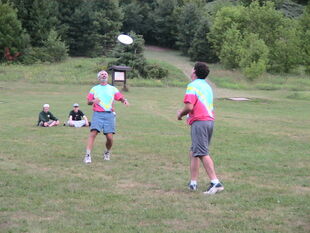 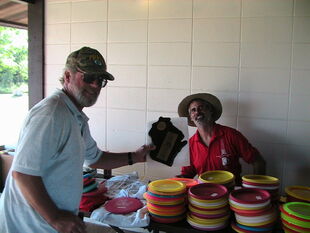 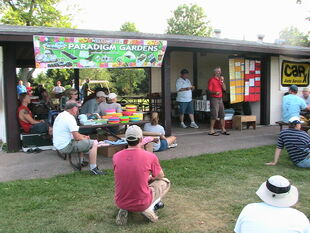 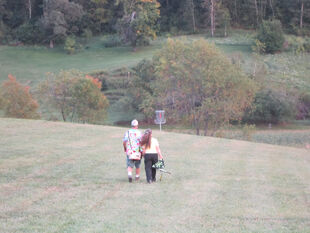 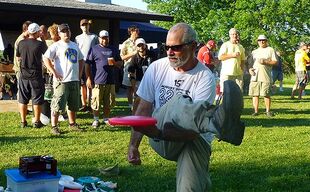 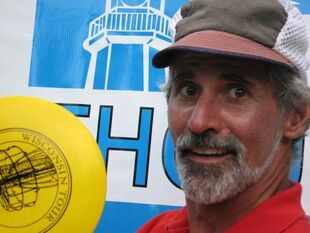 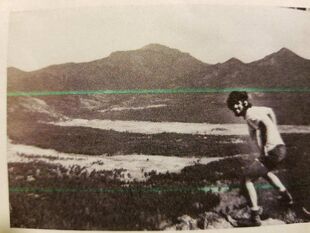 Brad jumping off a mountain 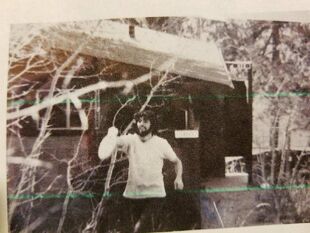 Zues in his element with a disc in hand. 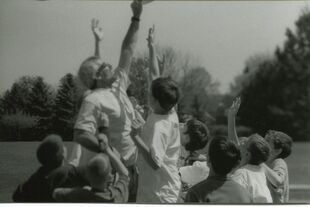 I can jump higher than all these kids!! 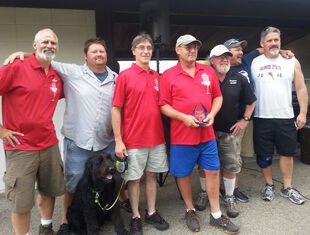 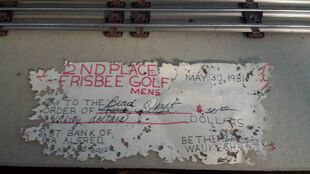 One of Brad's first pay checks for disc golf
Add a photo to this gallery
Retrieved from "https://widischistory.fandom.com/wiki/Brad_Wendt?oldid=5287"
Community content is available under CC-BY-SA unless otherwise noted.