Article By Brad Wendt... My disc sports business, Sportacular Flying Disc started in 1994 as a 22 show summer tour of public libraries in southern Wisconsin for their sports themed Summer Reading Program. Gary Auerbauch was my first partner. Gary went on years later to win a Freestyle World Championship and he started his own Flying Disc business Spinning Bees, on the east coast. He is a very excellent one man show, and a great fellow that gets along with the world of all ages very well. When Gary moved on, Craig Ewing joined the Sportacular Flying Disc show for a year or two.

Craig hired me to do shows with him as “The Frisbee Guys” on the Milwaukee Summerfest Sports Stage for 3 years. That gig was a blast. Always good crowds, we felt like we hit the big time when we were on that stage. You get to park in the performer lot and get chauffeured to the stage, gear and all. That included a big bucket and a box of discs and a portable Mach II basket.  We shared the performer trailer with some very interesting people. The closest restaurant sponsored a free burger, fries and shake for performers after each show and of course you were free to roam the festival full of great music after the gig.

There have been at least a half dozen Frisbee players that have headlined the Sports Stage  at Summerfest so it was always a big honor to perform there. Steve Jennings also hired me for a show.  Steve, Dave DeRemer and Dave Jewell had a long run of many years on the Sports Stage.

I must say I played well while at Summerfest except for one time. Mike Hughes and I entered a Freestyle Players Association tournament where a first round of Freestyle took place at a lakefront park not far north of the Summerfest grounds. It was a very impressive collection of Freestylers with many champions entered. Mike and I had some very good routines at that time so while we could not climb into the semifinals, we did belong there. A second round was held on the Summerfest Sport Stage. Unfortunately, for Mike and especially the spectators, I suffered my worst performance, by far, on that stage. I simply could not throw the disc anywhere near my partner Mike. In retrospect, if I was to ever bomb on that stage, that was the best time for it to happen. There were a bunch of great Freestylers that had the crowd going for the rest of the day. Fortunately, when performing an hour long SummerFest show for the big bucks, my throws were good to great, and tricks and catches worked pretty well.

There were a few years when Milwaukee Ultimate set up games right outside the north Summerfest entry gates where we would play a game or three, and then gain free entry into the festival for the rest of the day. Thank you Scott “Scooter” Severson for setting that up. So flying disc sports set me and many other players up for free Summerfest outings in exchange for showing off our sport to thousands of people.

Getting back to “Sportacular Flying Disc,” where Mike Hughes and I started to play quite a bit together; we performed at least 100 gigs from 1996 to 2010. Most of our furthest travels included two or three shows in a day. Mike’s dog Wham-o was at just about every one of the shows. Mike and I did some difficult and impressive tricks and throws. We demonstrated golf, distance, self-caught flight, and we showed off a bunch of odd and cool Frisbees. Even though Wham-o was not even a ten minute portion of the show, Wham-o WAS the star. Mike and Wham-o had a great routine during the show. That dog would catch everything. He had 180’s, 360’s and even flips. For one of the tricks Wham-o would sit 27 feet behind Mike, then on command, would run at Mike and jump off his back for a nice high flying catch. Spectacular!! Mike would find out rather quickly if he forgot to trim Wham-o’s nails. The last 20 minutes of the gig was always time set aside to play with the spectators. The basket and discs were a well-used option. I would spin disc’s for people to learn nail delays while Wham-o would chase and of course catch throws from many people (lagit sized kids and fully grown humans) all had fun with the “bestest” Frisbee dog this side of the Mississippi. Wham-o would play disc until he dropped if you let him.

The three of us put on a lot of miles as we presented shows from Manitowoc to Wisconsin Rapids to La Crosse to Beloit and the Milwaukee area, and everywhere in between. A Mach II was always part of the show. I have to think that we helped the growth of disc golf by including the basket in the shows. We have been to a ton of towns and many of them have courses now. One year, the three of us were the featured entertainment at the Opening Ceremony of the Badger State Games. We performed at the Vilas Zoo, schools, and many parks. Most of these gigs were at libraries, some were even indoors. One entire show was in a small basement room 20’ x 30’ with about 25 people. We pulled it off rather well. My son Woody, Dave Jewell and Duster were show partners when Mike was unable to attend. Another popular gig lately has been setting up a mini disc golf course in a public library for an annual after hours teen program. The Z Machine is a hit there, too.

Mike and I competed in many tournaments, including some Overall World Championships where we always advanced into finals and we won the 2003 A Disc’s Throw Master / Junior World Flying Disc Championships Master Division. We might have a fist full of WI State Overall Freestyle titles.

Though “Sportacular Flying Disc” does not advertise, the show is still for hire. Wham-o has moved on to the big field in the sky, but people can do some interesting things with a flying disc or three…………... 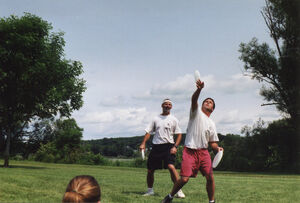 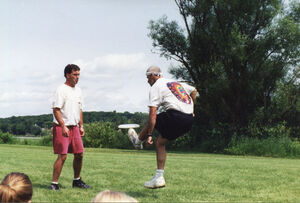 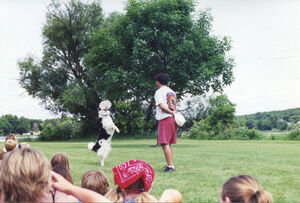 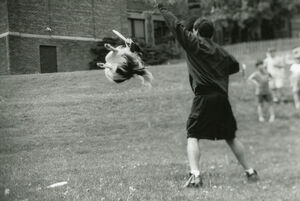 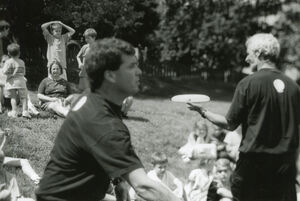 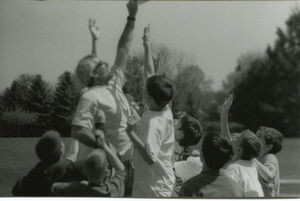 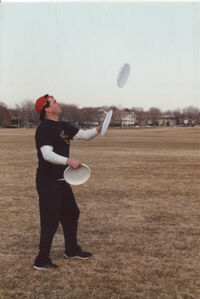 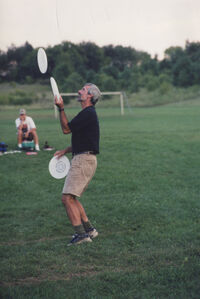 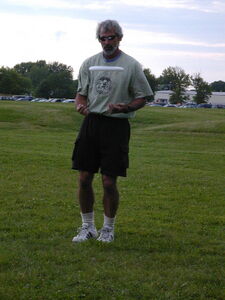 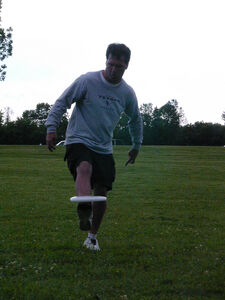